The Lapon Gold Project is located within the Walker Lane shear zone, a 100-kilometre-wide structural corridor extending in a southeast direction from Reno, Nevada. Situated within this trend are numerous gold, silver, and copper mines, notably the historic Comstock Lode mines in Virginia City, the past-producing Esmeralda/Aurora gold mine, with reported production of some one million ounces and the Anaconda open-pit copper mine in Yerington, Nevada. 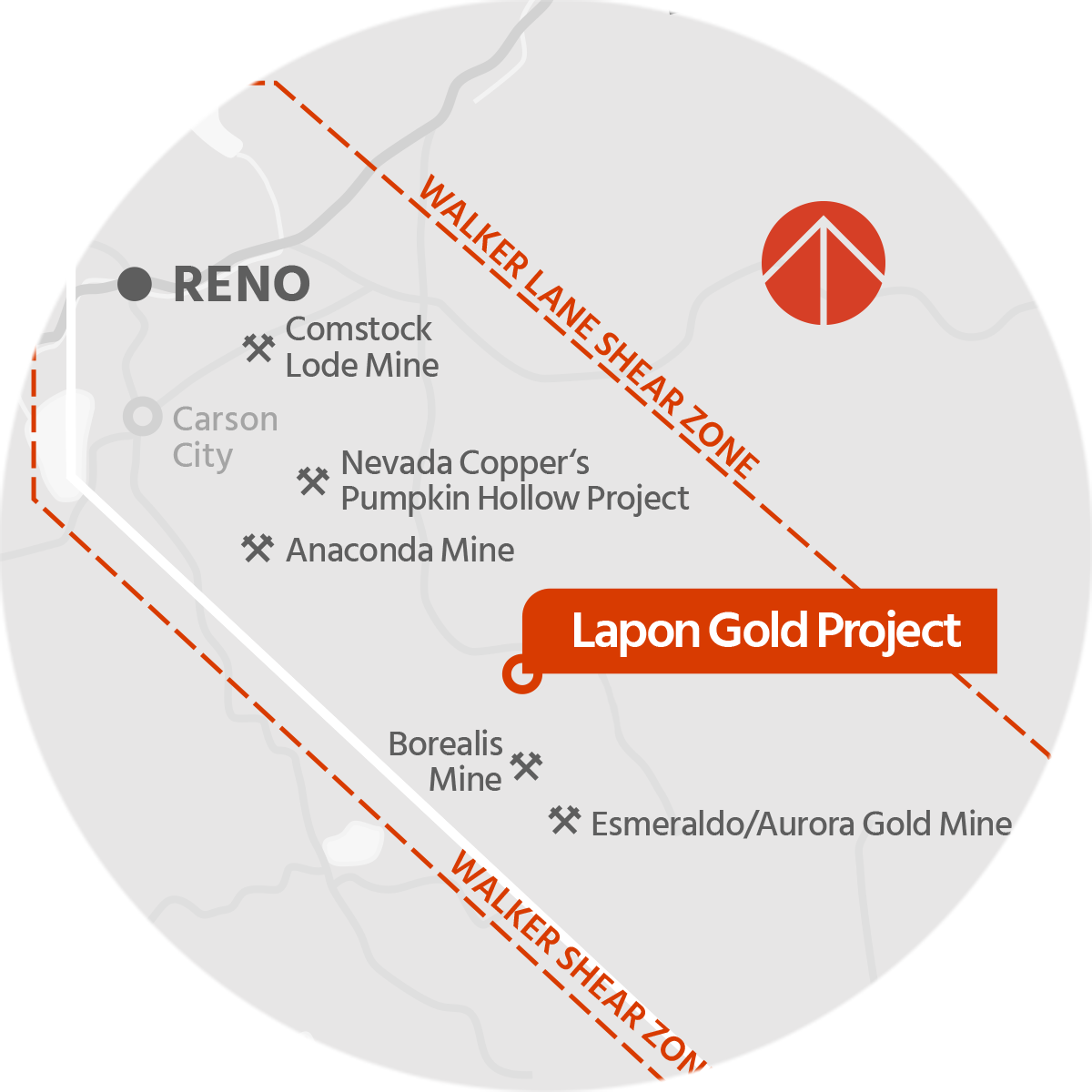 The project consists of 147 claims (2940 acres), including Lapon Canyon, The Pikes Peaks claims 4 kilometres to the north, and the Rattlesnake Range Front claims 3 kilometres to the west and over 600 meters lower than the present drilling at Lapon Canyon. The properties are easily accessible by secondary state roads from the main highway, with a state grid power transmission line passing within three kilometres.

Small scale high grade mining began on the project in 1914. Approximately 600 meters of drifts and raises were developed from two adits and a two-stamp mill was built. Further underground work was carried out, returning numerous assay values in the range of one ounce per ton, with a sample at the end of an adit returning 20.6 ounces per ton. (National Instrument 43-101, Montgomery and Barr, 2004). Additional work on the Project in the following years, included the installation of a ball mill and milling facilities.

Placer gold was originally discovered at the mouth of the Lapon Canyon around 1904. Placer mining up the creek resulted in the discovery of gold in the mine area in 1907, mining was also occurring in the Lapon meadows approx. 2.5 km upstream.

Small-scale high-grade underground gold mining occurred from 1914 onwards. The mine area at the top of the canyon was extremely difficult to access, indicating mineralization was rich enough to haul equipment and supplies up a steep canyon. Two adits were developed (B and C) with a sublevel and raise connecting them, approx. 600 metres (2000 feet) of underground adits and drifts were developed and a two-stamp mill was constructed. Cut-off grades in the stopes were reported to be 1 ounce gold per ton. In 1936 Newell sampled the adits and published values assaying as high as 5 ounces gold per ton (see figure 2).

In the early 1960s, Nylene drove an adit (A) 250 feet into the mountain and 275 ft below adit B. Nylene was targeting the down dip extension of the high-grade mineralization above. A sample taken at the end of this adit reportedly assayed 20.6 ounces gold per ton (National Instrument 43-101, Montgomery and Barr, 2004). Due to the large widths taken in adit (A)  the stoped ore caused the adit to collapse. During this same time period, new mill construction was undertaken with the installation of a ball mill and tailings pond. A second larger ball mill (500 tons per day) was to be installed, but the larger ball mill still remains at the base of the canyon, uninstalled. However, It is reported that Nylene’s health and finances deteriorated before he could profit from the discovery and abandoned the project. The Nylene Adit potentially hit the down dip extension of the high-grade mineralization above, warranting the expansion of the mill (to 500 tpd).  No further mining work was reported.

In 1990, Teck Resources Inc. discovered a surface area of argillitic alteration and low grade disseminated gold mineralization on the Lapon Canyon Claims, which they were able to trace over a strike length of 450 meters. Grid sampling over this zone returned an average grade of 2.01 grams per ton gold, in this zone which was named the Central Zone. Teck also completed trenching and a few shallow RC drill holes were drilled above the uppermost adit. In 2000, brief chip sampling program within adit B and C was carried out, without accessing the ore shoots (sublevel) along the walls. Values of up to 1.15 ounces per ton were returned. 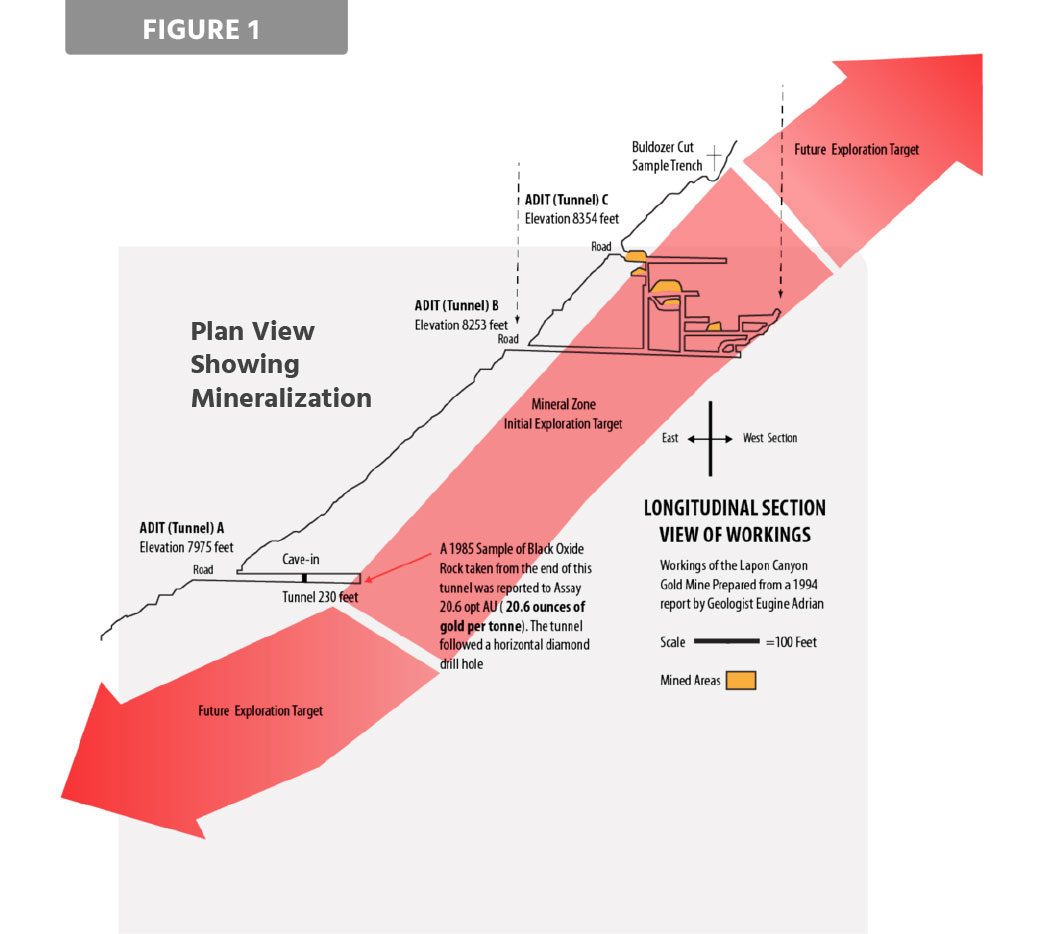 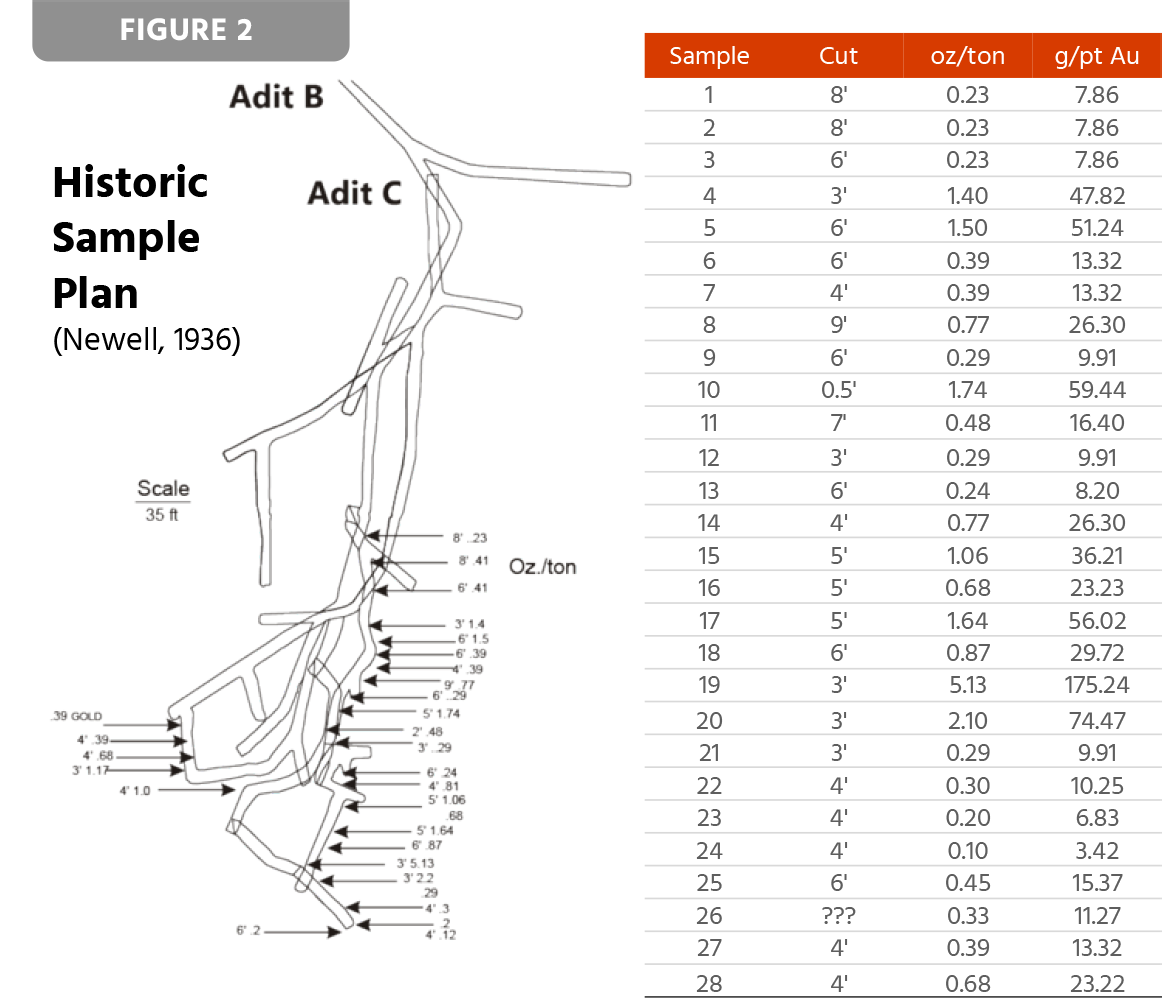 The Lapon Gold Project is cut by a series of steeply dipping cross fault structures cutting across the Walker trend, analogous to other cross fault structures responsible for many gold and base metal deposits in the world. These faults are heavily sheared and altered (sericite, iron oxides) with abundant silica, varying in width from 60 to 300 meters. Four of these structures have been discovered at Lapon Canyon, and at least two can be traced for over four kilometres. 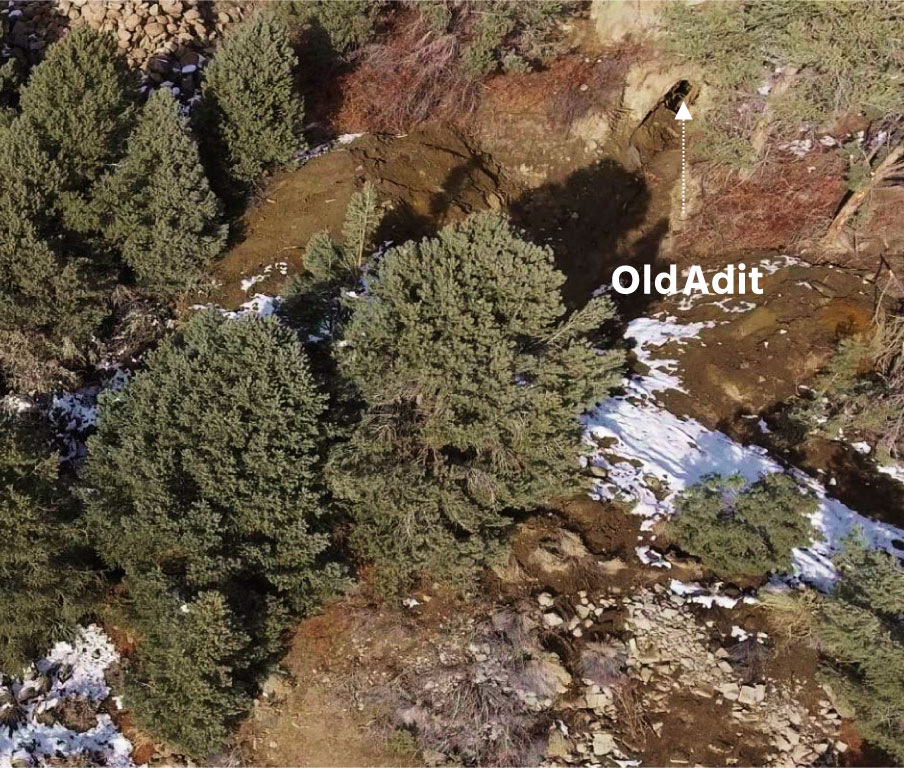